LUCIUS BURCKHARDT AND CEDRIC PRICE, A STROLL THROUGH A FUN PALACE

Swiss pavilion at the 14th Venice Biennial of Architecture.

Lucius Burckhardt and Cedric Price—A stroll through a fun palace is a multi-faceted project by Hans Ulrich Obrist presents by the Swiss Arts Council Pro Helvetia at the Swiss Pavilion in the Giardini from 7 June to 23 November 2014.

In a digital time of unlimited access to information, where everyone can be an architect, a curator, an intellectual thinker, Hans Ulrich Obrist’s Lucius Burckhardt and Cedric Price—A stroll through a fun palace revisits the recent past of architecture through retrospectives of Lucius Burckhardt (1925–2003) and Cedric Price (1934–2003), reflecting on its future in the 21st century.

‘We often invent the future with elements from the past. Lucius Burckhardt (1925–2003) and Cedric Price (1934–2003) were two great visionaries whose work resonates and inspires new generations in the 21st century. At the core of both their work is a practice of drawing. At the centre of the project will be the archives of drawings of Cedric and Lucius, of which different aspects will be revealed throughout the Biennale. ‘A stroll through a fun palace’ in collaboration with architects and artists will present a laboratory where the ideas of Cedric and Lucius can be toolboxes to invent the future.’ 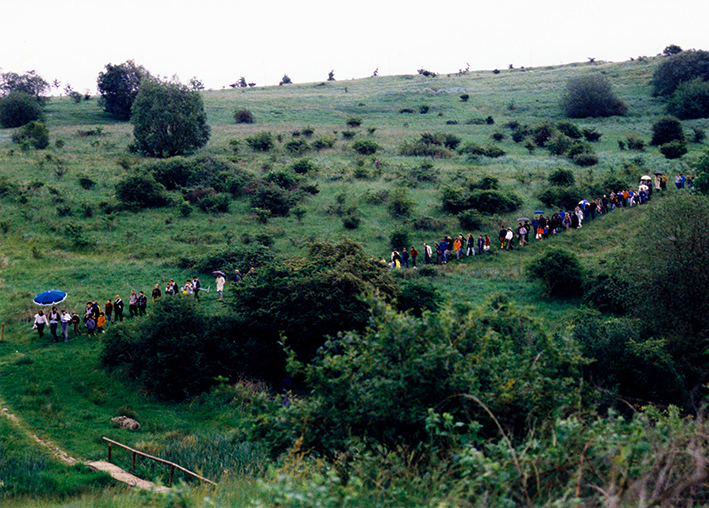 Lucius Burckhardt’s ‘Strollology’, the science of walk in the landscape

Both Lucius Burckhardt and Cedric Price are regarded as among the most visionary thinkers of the 20th century, redefining architecture as revolving around people, space and performance.

Lucius Burckhardt was a Swiss political economist, sociologist, art historian and planning theorist, known as founding father of strollology – his science of the walk. He pioneered an interdisciplinary analysis of man-made environments, discussing both the visible and invisible aspects of our cities, landscapes, political processes and social relations, as well as the long-term effects of design and planning decisions.

Cedric Price was guided by a fundamental belief that architecture must ‘enable people to think the unthinkable’. His project Fun Palace (1960–61), conceived as a ‘laboratory of fun’ and ‘university of the streets’, though never realised, established him as one of the UK’s most innovative and thought-provoking architects.

Both Burckhardt and Price critiqued the traditional tertiary education system and were interested in rethinking the basic concept of a university. Following their revolutionary teaching methods, Obrist’s Lucius Burckhardt and Cedric Price – A stroll through a fun palace radically reapproaches the idea of the national pavilion, reconceiving it as a site for cross-disciplinary, interactive, international engagement. Acknowledging that it is not possible to present the complex practices of Burckhardt and Price through a static display of drawings, Lucius Burckhardt and Cedric Price – A stroll through a fun palace aims for visitors to encounter the architects’ archives performatively. The display on Lucius Burckhardt is co-curated by architects Herzog & de Meuron, in collaboration with the Lucius & Annemarie Burckhardt Foundation and Martin Schmitz Verlag, whilst the temporary archive of Cedric Price is co-curated by Mirko Zardini, director of the Canadian Centre for Architecture (CCA). To present the temporary archives, Herzog & de Meuron have devised a site-specific system located in the graphic room of the Swiss Pavilion, aiming to create a new system of knowledge and ideas. Visible through the glass walls but not accessible to the public, it is to be conceived as an object on display. 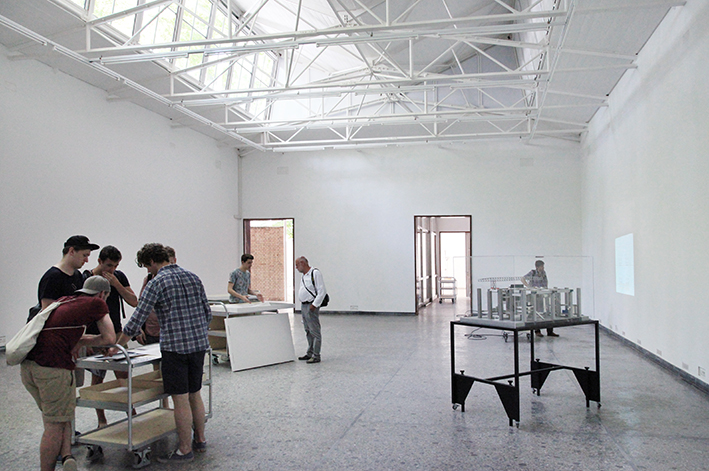 A dramaturgy—conceived by Asad Raza and Tino Seghal—envelops Price’s and Burckhardt’s production, selecting drawings from the archive and re-presenting them to the public.

‘As former students of Lucius Burckhardt, we were very happy to accept Hans Ulrich Obrist’s invitation to contribute to this small Biennale project – the longer we worked on it and thought about it, the less “physical” the exhibition concept became, so that, in the end, only Lucius’s and Cedric’s mental universe were floating in space.’
(Jacques Herzog and Pierre de Meuron, February 2014) 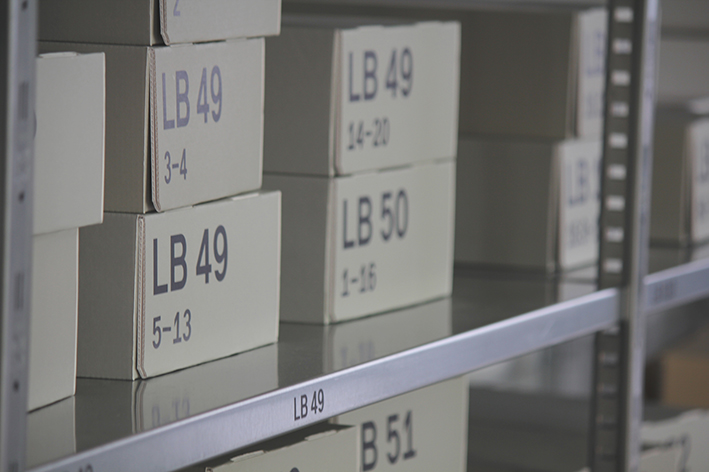 The archives, through a variety of materi- ale—photocopies, aquarelles, sketches, and videos—reflect not only the common ground, but also the profound difference, between Price and Burckhardt

The idea of an architecture that could take account of time was of central importance to both Price and Burckhardt’s practices, and the exhibition will reflect this aspect of their work. The space will be programmed according to a time-based dramaturgy, creating a changing mise-en-scène and an exhibition in constant motion. As the invention of new institutional forms was essential to Price and Burckhardt, the exhibition will also theoretically reflect on this endeavor. The opening days will feature a series of discussions on architecture, landscape design and modes of display. Several times a day Dorothea von Hantelmann will present vignettes on the past, present and future function of art institutions. The exhibition will also include contributions by Dominique Gonzalez-Foerster, Philippe Parreno, Asad Raza and Tino Sehgal, whilst other contemporary artists and architects, such as Dan Graham, Liam Gillick and Koo Jeong-a, will present their homages to Burckhardt and Price. 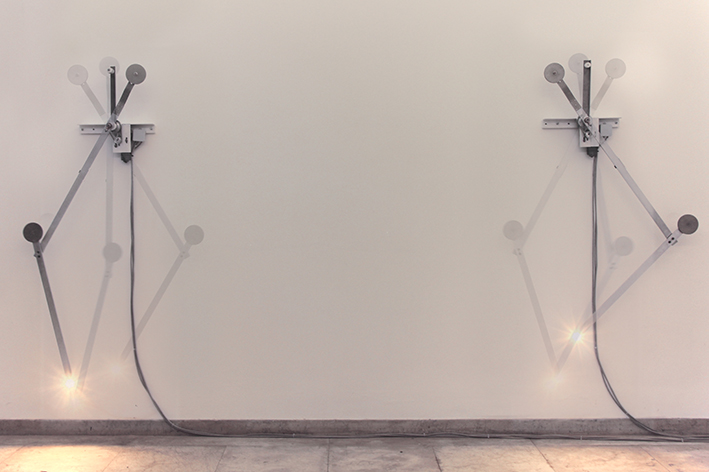 Following Burckhardt’s and Price’s critique of the traditional university system, Lucius Burckhardt and Cedric Price – A stroll through a fun palace will function as an architectural school under the leadership of Italian architect Stefano Boeri with Lorenza Baroncelli. It will welcome and connect students in a worldwide network of thinkers, schools and researchers, enabling them to reflect on how the contemporary landscape is changing. This network will produce a digital daily and a weekly print magazine titled The Tomorrow.

Invited by Hans Ulrich Obrist, Japanese architects Atelier Bow-Wow echoed the idea of Price’s Fun Palace with a strong visual intervention above the entrance to the Swiss Pavilion. 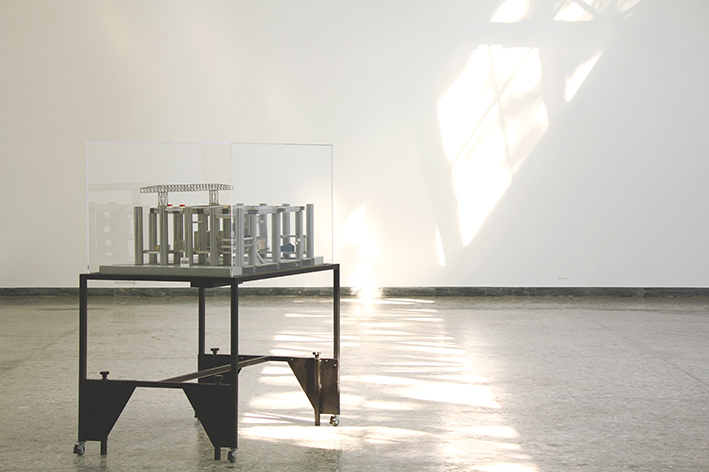 original model of the Fun Palace by Cedric Price conserved at Canadian Center for Architecture, Montreal—Canada

The opening days of the pavilion featured a Marathon event on architecture, landscape design and modes of display. The Marathon has been dedicated to Lucius Burckhardt and Cedric Price, their work and their lives. The program me included readings, roundtable discussions as well as homages to the Swiss sociologist and the English architect. Speakers included Rem Koolhaas, Jacques Herzog and Pierre de Meuron, Bernard Lassus, Okwui Enwezor and the artists participating in the project at the Swiss Pavilion among many more. 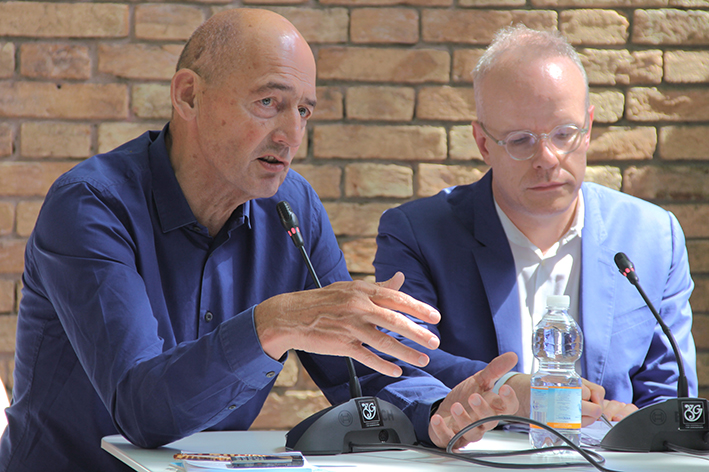 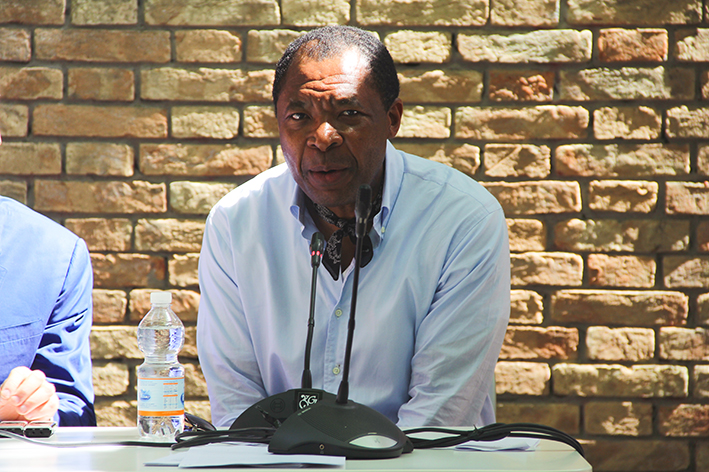 Okwui Enwezor, Nigerian-born writer, editor and curator and director of the 56th Art Biennale in Venice. 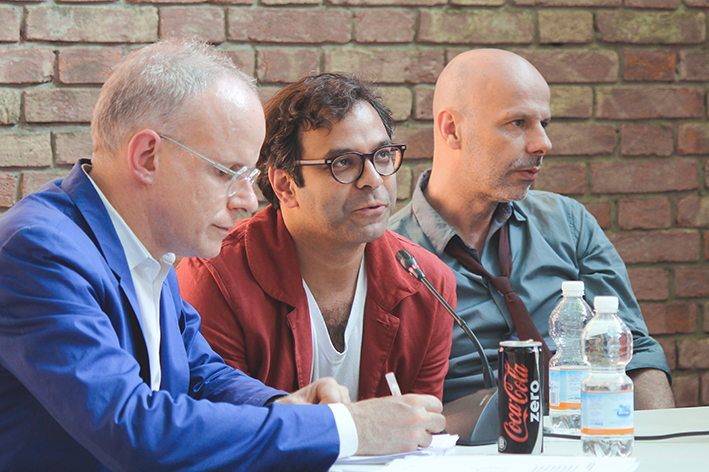 (from left) Hans Ulrich Obrist, Asad Raza and Philippe Parreno during the round table with Maja Hoffmann and Beatrix Ruf on “Solaris Chronicles”, the exhibition promoted by Luma Foundation in Arles and curated by Hans Ulrich Obrist 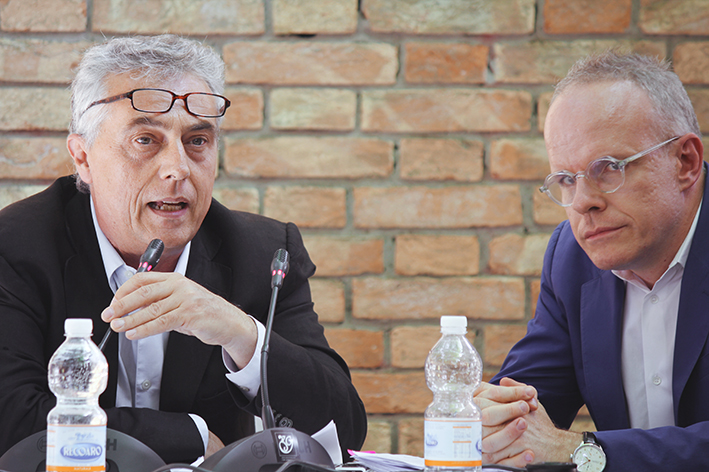 Stefano Boeri—Italian Architect and Urban Planner—discusses with Hans Ulrich Obrist about “the Tomorrow”, the first european magazine of culture conceiving Europe as a unique city. 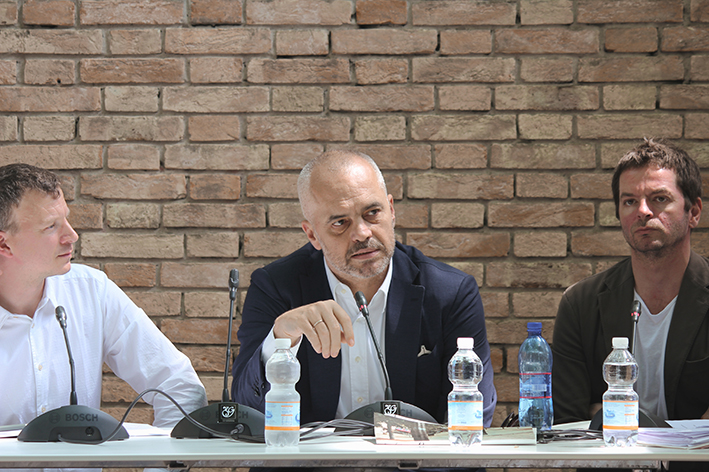 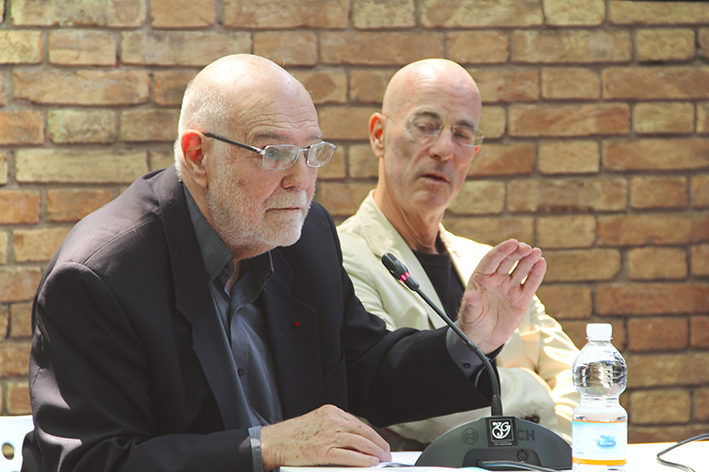 Jacques Herzog, Pierre de Meuron, Bernard Lassus and Hans Ulrich Obrist discuss about Lucius Burckhardt and the birth of “strollology”, the science of walk through the landscape 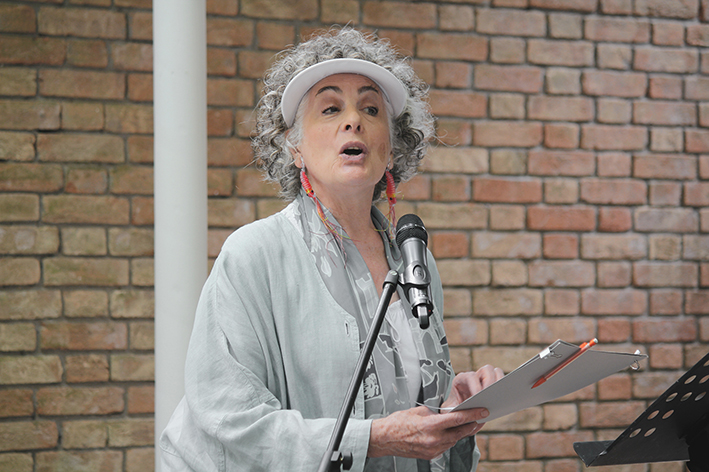 Eleanor Bron, an English stage, film and television actress and author of “Cedric Price Retriever”, an inventory of the contents of the bookshelves of her partner, the architect Cedric Price 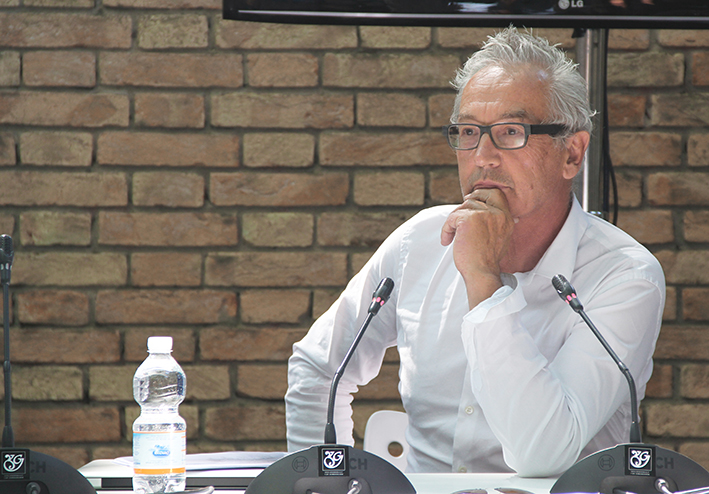 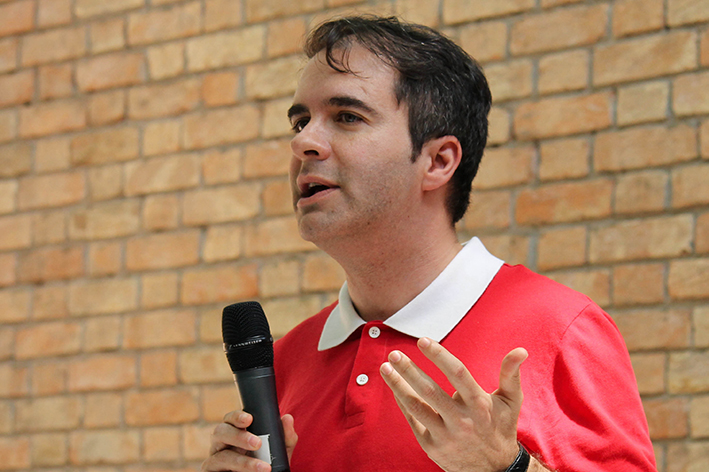 Tomas Saraceno (an Argentinean artist based in Berlin) and Joseph Grima (an architect, writer and editor based in Genoa) 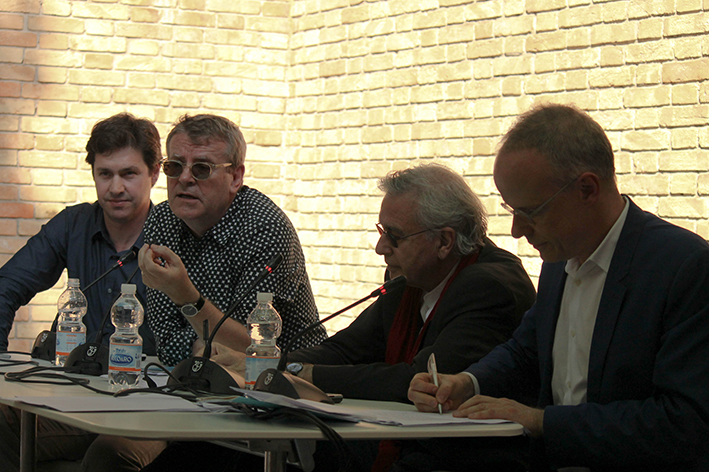 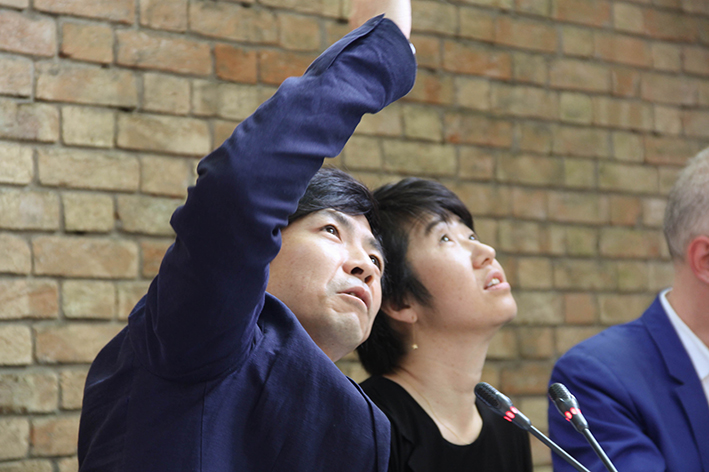 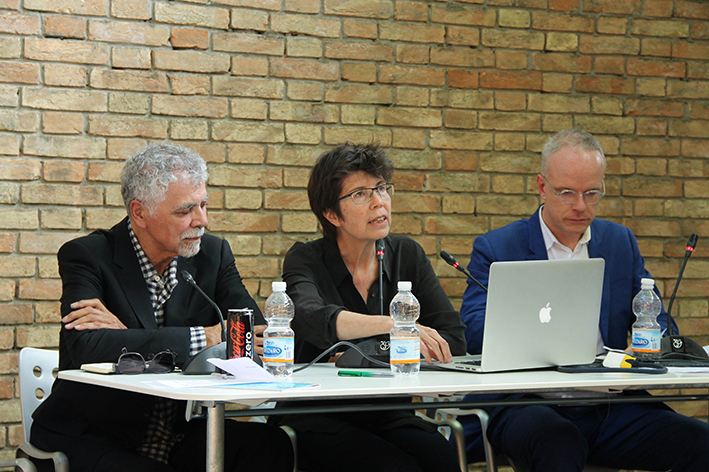 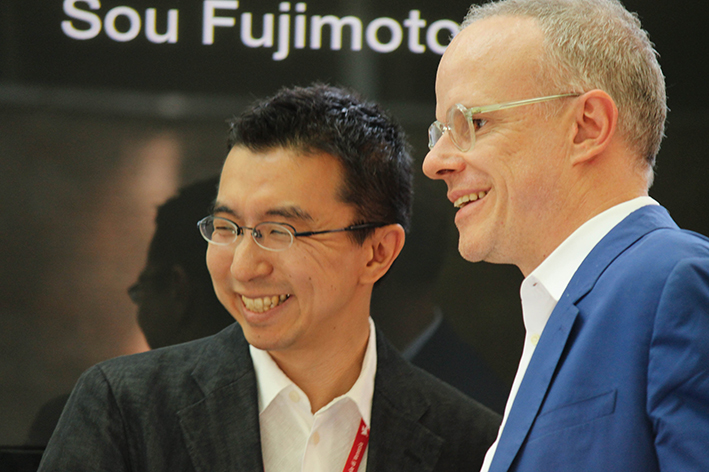 Lucius Burckhardt and Cedric Price–A stroll through a fun palace will be accompanied by a publication by NORM designers, Zurich.